(Note: clicking on any diagram in the posts goes to a larger version.)

Guitar picking is certainly an oft written about topic, usually with the goal of demonstrating how to play fast. I recently realized that I—closing in my 3rd decade playing guitar—still didn’t have a very good handle on all aspects of picking. So I went on something of an online video and tutorial binge, while also closely examining my own plectrum use, to get a better understanding of the subject. I’ve collected here what I feel are the most important ideas.

I should be clear what this article is not: it is not a guide to the “best” way to pick. If I’ve noticed one thing in my survey of players, it’s that there are lots of different ways to pick and what works for one person may not work for the next. I suspect variation in the structure of individual hands (and probably brains) leads to a diversity of techniques. But I do think being aware of the different styles of picking can only help one get better.

Let’s look at some picking techniques.

This one most people are probably aware of. It’s more efficient to pick a single note melody using a pattern of alternating upstrokes and downstrokes that simply using downstrokes (as I did in my early days of playing.) The reason being that if you were using only downstrokes you’d still be performing an upstroke after each note to get that pick in place for the next downstroke. Thus, you might as well get your money’s worth out of the movement (the upstroke) and pick a note with it. Most guitarists pick a melody like the following using alternate picking (as notated in the tab.) 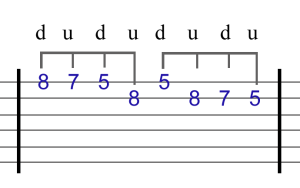 Let’s consider the following scenario: you’re picking a six note melody that has three notes on the 3rd string and three notes on the 2nd string. (See tab.) Using alternate picking, you pick the first note with a downstroke, the second with an upstroke, and the third with a downstroke. You’re now going to switch to the B string and pick the fourth note. Do you use an upstroke (as strict interpretation of alternate picking would advise) or do you take advantage of the fact that your pick is already moving downward (since the last note picked was a downstroke) and use a downstroke? The technique of economy picking advises the use of a downstroke. As the name suggests, it’s more economical to take advantage of the fact that your pick is already going in the direction of the next string. For example:

The red circle captures what is essentially a single movement.

There are other situations where an upstroke will point you in the right direction of the next target note and thus economy picking would advise hit two notes in a row (on separate strings) with an upstroke. (See tab below.) 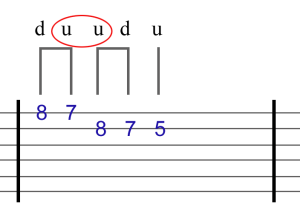 There’s a certain amount of debate as to whether it’s better to use strict alternate picking (in which every downstroke is followed by an upstroke and vice versa) or economy picking*. I’ve recently realized that I tend to use economy picking when doing downstrokes but not upstrokes (in which case I use standard alternate picking.) I’m having a certain internal debate about whether I should work on going “full economy.”

* Here’s an admittedly biased article about this debate. The author uses the term “directional picking” in place of economy picking:

I’ve noticed for years that economy picking does affect my timing. If I’m playing four notes in a row with alternate picking, the notes come out pretty even rhythmically. But if I do four notes in a row and the last note is on higher string and thus the last two notes are economically picked with the same downstroke, I tend to land on that final note a bit early. I’ve always liked this quirk of my playing and I feel it humanizes my playing a bit. (Perfectly rhythmic placement of notes sounds a bit robotic to me, like when you use the quantize function in midi software.) But you may not feel the same way in which case you’ll want to work on getting the efficiencies of economy picking while maintaining precise timing.

There’s a guy named Troy Grady who has done an extensive series of videos (not all free) looking at the topic of picking. (I definitely recommend taking a look at the free ones, at least.) He makes some interesting points about economy picking. To look at one example, let’s consider a situation where you are going up a scale. If you are doing three notes per string and starting on a downstroke, economy picking works great. You’ll end each of the three note groups on a downstroke that will take you right onto the next string. But what if you’re doing a 2 or 4 or 6 notes per string pattern? Now the advantage of economy picking is lost because you are ending on an upstroke, moving away from your next string. Check it out.

Grady argues that fast players, Yngwie Malmsteen in particular, consciously design their licks to get around this. Basically they use hammer ons or pull offs at particular points to maintain the optimum pick stroke. For example, the previous lick could be amended as follows.

I’ve also heard of players simply altering scale patterns with additional notes (likely passing or chromatic) to have the “correct” number of notes. (Frank Gambale does this apparently.) The first diagram shows part of a standard pentatonic ascending scale (D minor) with two notes per string. It’s followed with a tab of that pattern “adjusted” to be more conducive to economy picking (which in this case would require an odd number of notes per string.) 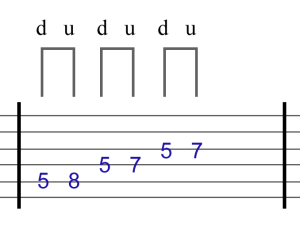 Pentatonic with added notes to ensure 3 notes per string

If you think this feels a bit like a cheat and is putting technique before the music, well, yeah, the thought occurred to me as well. At the same time, showing off has been an integral part of music performance for centuries and anyone who says otherwise is a fool or a liar.

That’s it for this post. In part two we’ll discuss different ways of angling your pick.

2 thoughts on “A Survey of Guitar Picking, part 1”