In a previous post, “Learning chord shapes on the guitar” we talked about learning some basic chord shapes. As noted in that post, learning these shapes only takes you part of the way towards playing a song. Once you’ve learned various chord shapes you then need to learn to transition from one chord to another. Each transition will involve a unique collection of movements but you’ll find  that a lot of what you learn in one transition will apply to others.

Let’s take a look at a transition. We’ll go from a C major chord to an A minor chord. First, let’s look at the chord forms. 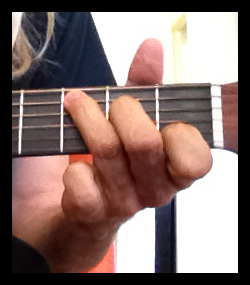 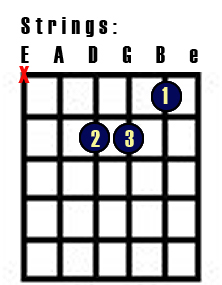 So, starting from the C maj, we lift our ring finger from the 5th string/3rd fret and move it to the 3rd string/2nd fret. Easy Peasy.

What does our middle finger do? Pretty much nothing as it stays on the 4th string, 2 fret. You might find it moves a bit closer towards the middle of the fret but that’s it. Our index finger also stays in place.The index and middle fingers would be what are called pivot fingers in this transition. These are fingers that don’t change location during a chord transition.

Let’s look at another transition, going from an F chord (everyone’s favorite) to a C chord. Let’s go to the diagrams. 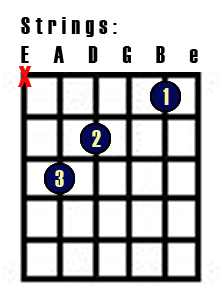 We have been mainly discussing what are called open chords—chords with open strings in them. That F is not an open chord, all strings are fretted, some by barring the index finger across the first fret.

Do we have a pivot finger in this transition? We do: the ring finger stays in place. But we have a major movement as the index finger lifts up from barre across the first fret and goes to the 2nd string/1st fret. Also, the middle finger goes from 3rd string/2nd fret to 4th string/2nd fret.

In the earlier post we talked about the idea of chunking. This is breaking complex movements down into individual parts and and practicing those parts on their own. Once we master them we can glue the movements together. In this transition, it’s best to think of each finger’s movement as a chunk. Practice them individually (say, practice each finger movement ten times in a row) and then try and group them together. Depending on your skill level, it may take a few practice sessions to get this complex chord transition into your muscle memory.

Let’s look at one more transition, C major to D major. Here are the chord forms.

One tip I’ve have found useful for these kinds of transitions: find the finger has to travel the greatest distance and perform that movement first*. You’ll find the other fingers sort of fall into place. In this case of C to D, it would be the ring finger moving from the 5th string to the 2nd string.

* Ultimately, you’ll be performing all the finger movements simultaneously but at the beginning this is a good way to go.

These processes—pivot fingers, chunking etc.—can be applied to many chord transitions. Once you use them to figure out the best way to transition, it’s simply a matter of practice.

Of course, once you’ve got some chords down you’ll want to strum them with the right hand (if you’re a righty that is; reverse for lefties.) I have an article on that as well.

One thought on “Transitioning between chords on a guitar”